In this page, I will put one or more “tiny treasure(s)” on a vector graphics illustration and let you find it (them).

First get the PDF file in question by clicking “Get its PDF” icon as shown below.

Then I recommend saving the file on your local storage of your PC or smart phone if possible for patient treasure hunting.

When you find the area where the treasure may be in, try to zoom in the area with a “zoom tool” such like Marquee zoom on a PC or your two fingers on a smart phone to show it. If you are right, you can see the treasure object drawn precisely there.

Thus, as an image created in vector graphics can be scaled to any size without sacrificing its quality, it is possible to put treasure objects at any size on the area of the illustration. 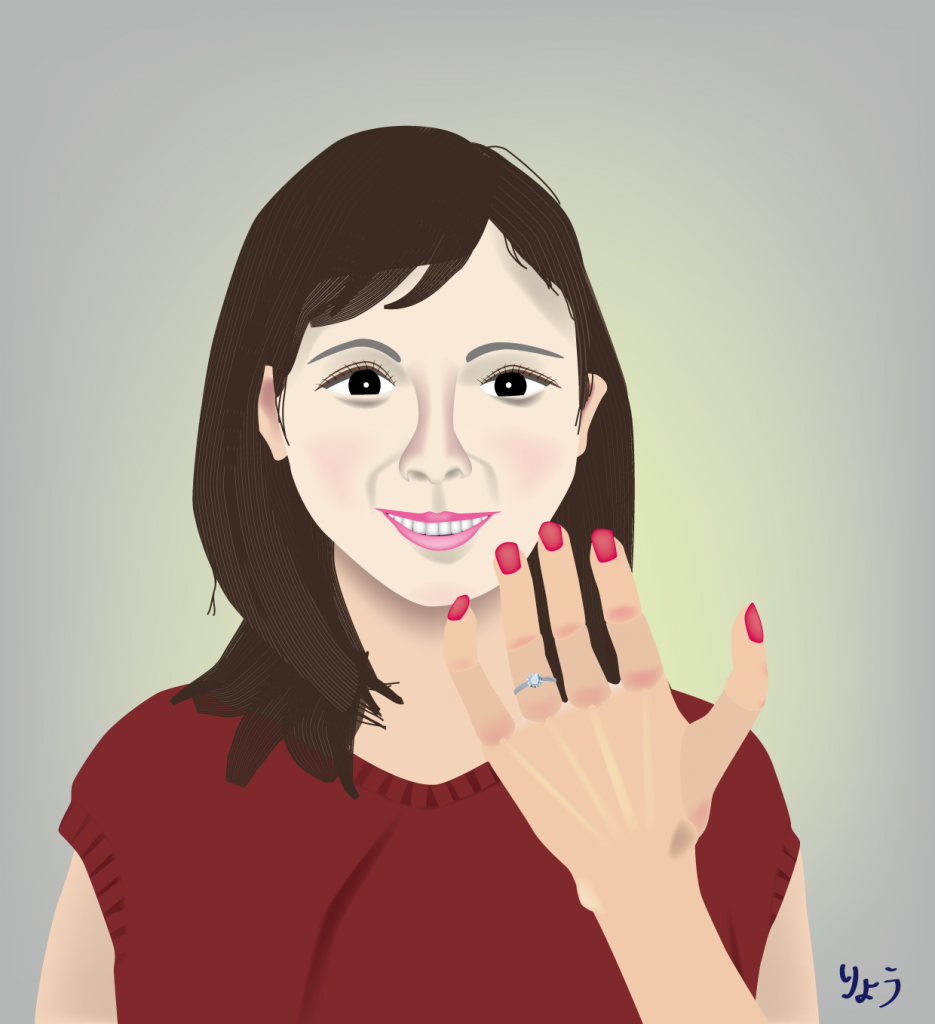 This is a simple exercise so I will show you the answer from the beginning. Needless to say, the treasure on the illustration is a diamond ring the woman put on her finger.

At a glance, you may see the ring was drawn in a negligent way. But if you zoom in the area, you must see a clear diamond ring there.

Q2. On the Mongolian Steppe In vast Mongolian steppe, a man sees nine women wearing native costume standing far from there. They seem to prepare to take a commemorative picture for a coming festival. As he has good eyes, he recognizes that one of them may be his daughter.

By the way, when the painter of this illustration finished drawing the first woman (i.e. this daughter) carefully, he felt it’s very hard jobs to complete rest of eight women in a same manner. So he decided to cut corner with drawing these eight parsons. He thought he was allowed to draw each of them very simply just like sometimes seen in many landscapes in oil.

However, such a “simplifying” no longer applies to vector graphics. As soon as you get its image PDF file and zoom in the area in question, what he has done is exposed!

“To create a compact image file”, that’s a good excuse for the painter. What do you think about that?

Q3. Kompeitō in the Starry Sky A boy is dreaming a beautiful dream of starry sky. As he likes sugary sweets, he wish a lot of kompeitō (a Japanese sugar candy) were in the starry sky with stars every time he looks at the night sky. Now his dream has just come true!

By the way, I put twenty kompeitō in the illustration. How many ones can you find? Just download its PDF by clicking below icon and try to find them.

Q4. Matryoshka dolls and a Sparrow A girl put every doll of her favorite matryoshka dolls set on a table and looked at them happily. Then a sparrow suddenly got into the room through a window and was about to peck at the smallest doll. Probably it was so small that the sparrow thought it was something like a grain to eat. The girl was astonished and wondered if the doll was eaten really.

In fact, some of smaller ones changed their “facial expression” at the moment. Please download the vector graphics PDF file and try to see how they are.

Q5. Hepburn and a Fairy Audrey Hepburn was rather mischievous movie star and she sometimes looked like a fairy. So this time, an “actual” fairy appears close at hand. Please look at the face of the fairy after getting the PDF of this illustration (1.25M bytes). Are the two “women” similar? A boy had been looking for three missing marbles which are treasures for him but not been successful in doing so. Some day when seeing the goldfish bowl in his home, he found the marbles in the bottom of the bowl. He may have possibly dropped them by mistake.

This time, it is not so difficult for you to find the three marbles without the PDF of this illustration but any way I’m going to provide it for you. Hi, I’m a high school student. Today I came to the beach to enjoy summer weekend. But all of a sudden, when I stumbled a stone on the beach, I dropped a contact lens from one eye. I believe you are so kind that you help me search the contact lens by zooming in the vector graphics (PDF) of this picture carefully. By the way, when I looked at a tree over there, I recognized something like a butterfly of another species stop on the trunk of the tree. It must be a Sasakia charnda (great purple emperor)! To confirm that, please check the PDF file (1.54M byte) of this illustration. A woman is staring at cliones in a cylinder tank at an aquarium. She seems be healed by their figures like angels.

I recommend you to feel better just like her by getting the PDF file (1.34M byte) and zooming in on each image of them.

Q10. I Want to Be an Astronaut When a little boy looks up the sky, he finds something coming across there. In fact, it is a space station orbiting the Earth. Then the boy points at it and he thinks he wants to be an astronaut to have a relationship with extraterrestrials…

This time, I used the background which had been used “E.T. the Extra-Terrestrial”.

You can see a precise image of the space station by getting the PDF file of this illustration (1.04M byte).

Q11. Coming Back to Kyoto by Shinkansen A maiko who had worked in western Japan for a few days is just coming back to Kyoto by Shinkansen. Then a colleague of the maiko is seeing the train from a distance. In fact she intended to go pick up the maiko at Kyoto station but she couldn’t do it because she is now so busy. She guesses the maiko may be sitting in the front row of the train and waving her hand.

Please let her know that what she guesses is correct by checking the PDF file of this illustration (1.12 M byte). Hachikō is widely known as a faithful dog in Japan. The dog had been waiting for its owner every evening at Shibuya station even after his death without knowing the fact. Hachikō might have cried seeing his phantom as shown in this illustration.

How did the owner like? OK, you can see how he looked a kind gentleman by checking the PDF of the illustration (831 K byte). Kūya was a Japanese Buddhist priest in 10th century. This illustration was created based on the stature of Kūya at Rokuharamitsu-ji in Kyoto where “he” is reciting invocation ‘Namu Amida Butsu’ which represents six small figures of Amida. In a vast steppe, a rabbit was eating grass. Suddenly the rabbit seemed to find something like a fearful natural enemy in the sky and then started running away like hell.

If you are side with the rabbit, please investigate what is the enemy by accessing the vector graphics PDF file (776 K byte).

Q15. Snow is coming down in Large Flakes! On a cold winter day, a girl looked out of the window and saw snow coming down in large flakes. Then she was frolicking and went out of the house without wearing any winter clothing.

She was gazing the falling snows and when some of them landed on her palms covered with gloves, she began observing each snow crystal.

Please see the precise shape of the snow crystal with her by getting the vector graphics PDF file (916 K byte) of the illustration. A bride just finished her wedding ceremony. Then a ladybug came and flied in front of her for a while and landed on her forefinger. As she felt the ladybug might bring the fortune, she whispered a word of thanks to it. After a while it walked toward the sunlight and took off.

You can see the ladybug closely by getting the PDF (1.24M byte) of this illustration.

Q17. Are you overworking? A cat found a sandglass and thought what it is. After a while “he” understood it could be used as a clock. Then it reminded “him” of a business man working too hard who is pressed for time.

As the cat is carefree with time, “he” sympathized with the man and said to the sandglass “Are you overworking? Don’t hurry!”

You can see a world which the cat imagined by getting the PDF of this illustration (1.03 M byte). A woman loving hiking reached a pond surrounded reed. Then she found a woodpecker pecking a hole in a tree on her right side. On the surface of the pond, she also found a pair of mandarin ducks. So she thought it was a nice place for bird watching and started watching wild birds with her binocular.

After a while as she heard crying voice of migratory birds on the sky, she tried to watch the direction and found two birds flying there.

You can see the migratory birds she watched by getting the PDF of this illustration (2.86 M byte). A woman looks happy wearing an earring. Watching the earring carefully, you find it look like a hammer. Actually this hammer is called “Uchide no kozuchi” in Japan which is said to make a lot of money in some Japanese old tales.

You can see the hammer by getting the PDF of this illustration (1.04 M byte). In a vast tulip field, a girl felt happy and started running around. You can see her face more detailedly by getting the PDF file (1.48 M byte) of the illustration and zoom-up the face. How vivid it is! In a vast nemophila hill, a boy is standing with a red balloon. He may have something like a fantastic idea looking at the balloon against a background of blue sky.

Now you can see the little boy and each flower in detail by getting the PDF (805 K byte) of this illustration. Note that the PDF contains so many symbols that it takes tens of seconds to display the PDF completely on a smart phone. A girl is having a big onigiri (rice ball) after she has played hard with some friends. She wears an Origami helmet that shows she is a rather boyish and mischievous girl.

She relishes the onigiri because she is so hungry.

Let’s get the PDF (833 K byte) of this illustration and see every grain of rice. A woman called “Fujiko” is watching Japanese wisteria (it is called “fuji” in Japan) at the foot of Mt. Fuji. The woman comes from “Lupin the Third”, Japanese manga series. Actually this scenery means a joke that contains three “fujis”.

You can see each flower in detail by getting the PDF (1.15 M byte) of this illustration.

Q24. A Frog Using a Parasol In a sunny day during the rainy season a tree frog on a leaf of a hydrangea is using a parasol to avoid direct sunlight. Actually the frog likes rain but hates strong sunlight.

You can see the frog and each flower of the hydrangea in detail by getting the PDF (952 K byte) of this illustration.

Like!! I blog frequently and I really thank you for your content. The article has truly peaked my interest.